Dalibor already got the sandals on. Stojadinka sits on a stool and waits as usual until her brother helps to make the buckles. Then she jumps up, half running, half jumping ahead. When they open the door to the garden, when the shallow pressure equalization between the cool air of their stone house and the rich, warm outside air has taken place, and the Serbian sun blinds them, the first rays hit their tanned skin, and they go over the perfectly mown and still moist grass of their front garden to the gate, then they can laugh light-heartedly for a moment and enjoy the little paradise that has been prepared for them.

Dalibor has his hands in his pockets. The meadow is so high, it goes up to his hip. He can only see Dinka from the shoulder upwards, she disappears almost entirely between the dense green. She has already gone ahead and is picking flowers. Dali is in no hurry. To his right is a small Omorika spruce forest. Its tops glisten in the morning light, its cones smell spicy. They stand so close together that Dinka might just be able to slip between the trunks. But Dinka is busy picking a bunch of flowers, as she always does. It is already so big that she can hardly hold it with her little hands.

Dali can still remember the time before that. A time when they were still together and everything was good. Then Dinka was born. For a while, everything seemed to be good. Then it started. First, they were not allowed to see their friends anymore. Then, Dinka was two years old, they had to leave the station from one day to the next. That was already three years ago. 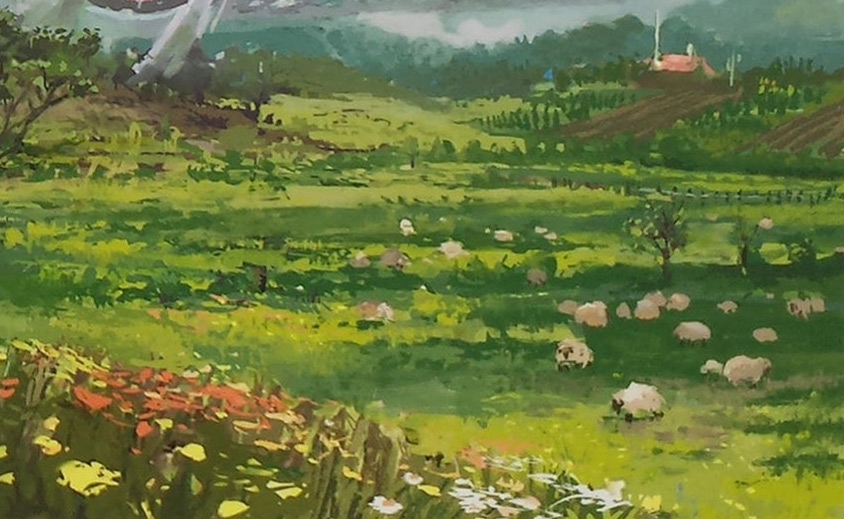 “Come, Dali, we are going to the sheep” Dinka shouts. She makes a big, inviting gesture with her arm as if she were leading a group of men into battle. Dali changes direction a little. They walk across a wildflower meadow that has never been mowed before. Flowers in all colours, sizes and variations are opening their blossoms. The last rope beads from the leaves. With their hind legs, the wild bees wipe off the last moisture of the morning from their wings and belly. Now they go to work. Dali pushes his feet through the grass, grasshoppers hop left and right. Torn blades of grass gather between his toes, the leather of his sandals get dark from the moisture.

His sister has buried her hands in the thick fur of a sheep when Dali joins him. This is where the sheep like to come together. Children and sheep sink a little deeper at this point because the ground is boggy, the grass particularly juicy. Here you can find the sheep in the morning. Around noon they eat the herbs behind the Omorika spruce forest. In the evening, they drink down by the stream, and at night they slip through the Omorikas to sleep on the moss. Dali plucks a lichen from the wool of the sheep that has pressed itself against his belly. “Yes, just eat. Dobro, dobro,” says Dinka and fondles the head of the sheep that is eating her bouquet. Dobro, dobro, as her mother always said, remembers Dali. The sheep set off and trot off.

“Whoever gets to the car first! calls Dali runs off and gives Dinka a slap on her butt. “Hey, that’s not fair;” she shouts and runs after. Dali knows he’s faster. But he has to make his way through the meadow. Dinka uses the aisle and gets a little closer to him. But then she stumbles and falls to the ground. When Dali hears the scream, he stops immediately and turns around. Dinka sobs on the floor and holds her knee, drops of blood roll from her shin to the sandals. He runs to her and kneels next to her, panting from the race. “Does it hurt? Let’s see,” says Dali. Her left shin is open. Dali enters a few gestures on his electronic bracelet, which glows every time he touches it. “Help is on its way, little Dinka,” he says and wipes away her tears. Then the drone arrives, a small white box with five humming rotors, stops a few meters above their heads, and when Dali makes another gesture on his bracelet, the flying helper drops a parcel just a few centimetres next to Dali. Dali takes it, and tears open the pre-perforated side. The big brother disinfects the wound with a spray and stops the bleeding. With the cloth, he cleans her leg. He stuffs spray and cloth back into the package and throws it into the air. Immediately the drone with its buzzing rotors performs a lightning fast manoeuvre to catch the parcel. As fast as it came, the first aid has already disappeared again.

“All right?” asks Dali. Dinka nods and wipes her nose with her arm. “Come on, I’ll piggyback you.” Dali kneels a little, Dinka lies down on his back and puts her arms around his neck. As he straightens up, she wraps her legs around him, which he grabs with his hands. Dali loves to take Dinka. Already when she was a baby, and he could hold her just like that, he liked to take her in his arms. With her sweet breath in his neck, he stomped across the meadow, past a single sheep that had not yet eaten its fill on the lush grass. Their way leads them to a small group of Omorikas, and when they reach the end of the conifer group, they can already see the rusted car wreck. Dali gently lets Dinka go. She crawls into the wreck, sits behind the steering wheel on the full of holes upholstery and plays a car ride. Dali doesn’t feel like driving a car and squats on the hood of the hard to recognize Aqos 25. He looks up into the sky. There, partly covered by clouds and haze, partially swallowed up by space, he sees the largest structure ever built by human hands. Like a small moon, the wheel of the power plant rises from the sky, supported by pylons, from which large lines, the planetary capillaries, branch out and extend along the horizon.

Dinka crawls through the opening in which there used to be a windscreen and sits next to Dali. She grabs his hand and cuddles up to him. “She asks Dali: “Do you miss them, too?” “Yes”, Dali answers. “I would love to see them again. And if it were only once.”

For a while, they will sit together and give each other comfort. As the siblings get hungry, they run back home. There their android is already waiting at the open garden fence. “Welcome back, Dalibor. Hello Stojadinka. How’s your shin?” Dinka smiles at the android. Dinka and Dali run hand in hand over the perfectly mown lawn. As they enter the house, they can smell the food that the android has prepared for them. They wash their hands and sit at the table. They look forward to the time when they can be together again. Even if it will never be the same again.

This short story is inspired by “The Powerplant” by Živko Kondić Zhillustator and was written on June 2, 2019 by Thomas Riedel. The pictures are from Živko, who kindly made them available to me for use in this article.